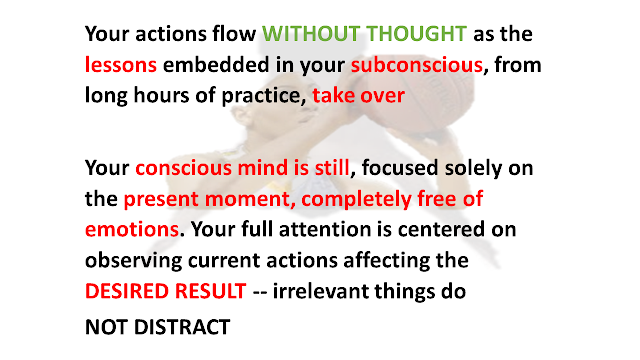 Roger Federer, at the age of 37, has won an all-time record 20 Grand Slam singles titles and has reached a record 30 Grand Slam finals (10 consecutive, and another 8 consecutive – the two longest streaks in history)
As a young player he threw tantrums and his racket and yelled at referees But “Today, I'm totally ZEN".
He credits his emotional discipline to helping him focus and endure the most challenging moments in matches.

In 2019, the Patriots won Super Bowl LIII, earning Tom Brady his sixth super bowl title at the age of 41, becoming the first player in history to have won six Super Bowls. Over his career, Brady has won three league MVP awards, six Super Bowls, and four Super Bowl MVP Awards.
Brady’s locker contains a bronze statue — the Vedic Lord Ganesha :‘The remover of obstacles.'
“Look at the attention I get: It’s because I throw a football,’’ Brady said. “…….That’s not what God values…..”
Brady believes the greatest efforts in sports come when the mind is as still as a glass lake.  And so it was; when In Super Bowl LI, Tom Brady CALMLY faced a 28-3 opposing Falcons’ lead in the third quarter.
He maintained his poise despite constant pressure from the Falcons’ pass rushers.
Brady engineered an improbable 34-28 overtime victory — the biggest comeback in Super Bowl history.
He was named the Super Bowl Most Valuable Player for an NFL-record fourth time.

As head coach of the Chicago Bulls and Los Angeles Lakers, Phil Jackson won more championships than any coach in the history of ANY professional sport in the USA; not just Basketball (11 NBA championships)
His parents were Assemblies-of-God ministers; and as a child, he was taught the continuous CENTERING to a greater purpose than his own. He found the triangle offense aligned perfectly with the values of selflessness and mindful awareness in ZEN
He was never rattled. He never overreacted. “When you play the game the right way….. winning is the likely outcome.”

We've extracted the UNIVERSAL elements from historical practices.  See the power of the primordial OM sound, in this video of a BABY's instant CALM

This meditation technique starts with easy steps based on following one’s breath; but at the advanced levels, visualizations, chakra colors, and mantras will be utilized. Eventually you’ll learn how to be an “observer”, even as you act quickly and firmly, in a physical way.  You’ll have achieved Satori, as in Zen.  You’ll be MINDFUL every minute of your day (when your eyes are usually OPEN!)
This is a SECULAR mindfulness meditation technique, based on UNIVERSAL principles.
A minute-at-a-time becomes ALL-THE-TIME, almost effortlessly
-------------------------------------------
Maintain feelings of joy, serenity, hope, gratitude and humor; even when beset with negative external forces.  Grounding oneself in this well of positivity; enables love for all, to keep growing.
But living this way, under all circumstances, takes a powerful tool.

Information and statements regarding dietary supplements, or any other healthcare protocol, provided herein; have not been evaluated by the Food and Drug Administration in the USA, or any similar Agency in another country, and are not intended to diagnose, treat, or cure any disease. OASISforHEALTH assumes no liability for inaccuracies or misstatements.

Text is made available under the Creative Commons Attribution-ShareAlike License

You are free to:

Share — copy and redistribute the material in any medium or format

Adapt — remix, transform, and build upon the material

for any purpose, even commercially.

Attribution — You must give appropriate credit, provide a link to the licensor, and indicate if changes were made. You may do so in any reasonable manner, but not in any way that suggests the licensor endorses you or your use.

Hi Carbs or Hi Fats? Which One Causes Heart Attacks? Shortens your LIFE?
May 17, 2021